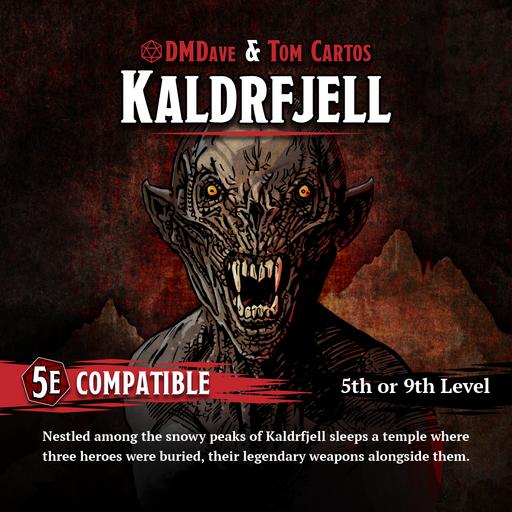 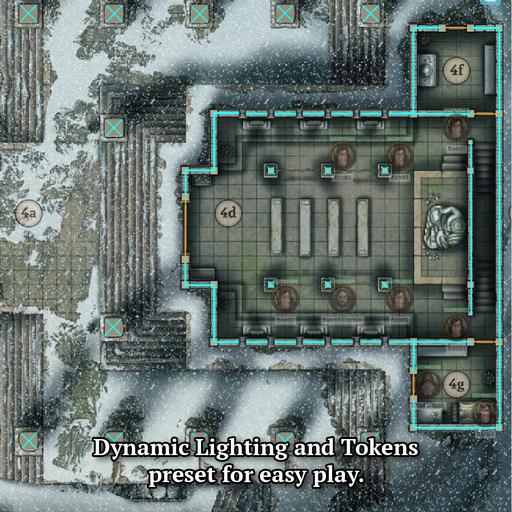 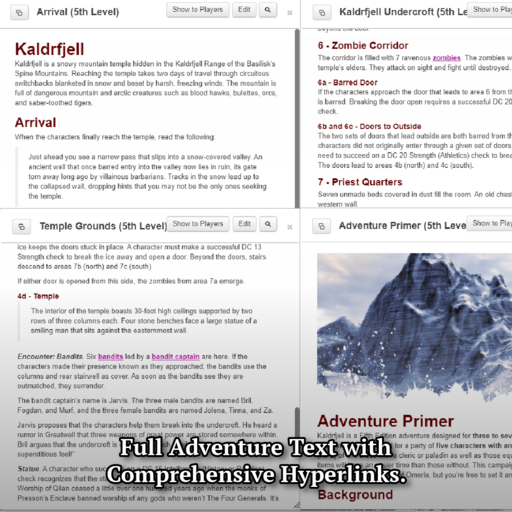 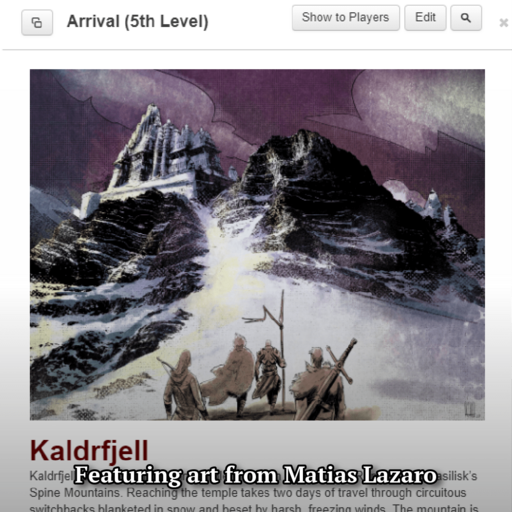 Kaldrfjell is a Fifth Edition adventure designed for three to seven players of 5th to 10th level. It is optimized for a party of five characters with an average party level (APL) of 5 or 9 (there are two versions). Parties with a cleric or paladin as well as those equipped with magic items will have an easier time than those without. This campaign is set in the DMDave campaign world of Omeria, but you’re free to set it anywhere that you like with a snowy temple in the mountains.

Nestled among the snowy peaks of Kaldrfjell, a northwestern section of the Basilisk’s Spine Mountains, sleeps the temple that takes the mountain range’s name. It may once have had a title of its own, but if so, it is long forgotten. For centuries it was a place of pilgrimage and sanctuary for many. It was home to an entire monastic school, but now, it is occupied by a lone monk, Elder Maxim. Maxim barred shut the entire lower section of the temple due to neglect as well as a slow incursion of monstrosities from below. One hundred years ago, when the temple still received pilgrims daily, a horde of barbarian raiders tore through the local townships. The people fled to the temple in hopes of finding safety, but were pursued by the raiders. Most made it inside and the gates were barred. However, this did not deter their attackers who threw themselves against the walls. All hope seemed lost until three heroes appeared from within the temple, their weapons drawn. For four days and four nights, this trio bravely fought off the barbarians until they each finally succumbed to their wounds. Their heroic sacrifice was not in vain. They decimated the horde and the few barbarians who remained fled into the mountains, never to be seen again.The three heroes were buried within the grounds of the temple, their legendary weapons alongside them, and their names added to the stone tablets that tell the temple's history. No one now remembers exactly where the burial site was, but it is said that if another group of heroes should find themselves in need, they could seek it out and discover new strength there.

Install this Add-On via the dropdown menu in the Game Addons section of the Game Details Page. Select Kaldrfjell below and click on the blue Add to Game button beside the drop down menu.

For more adventures by DMDave head over to his Roll20 Marketplace