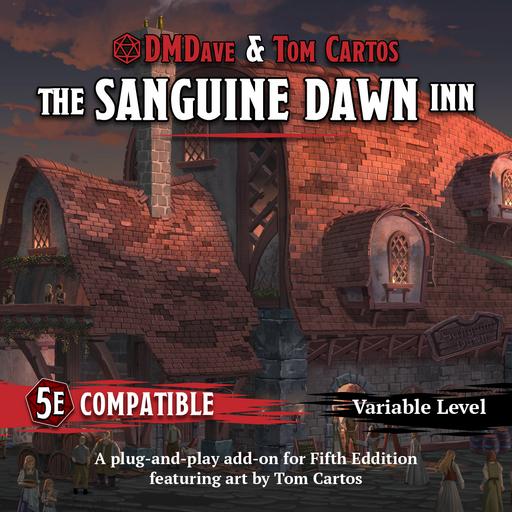 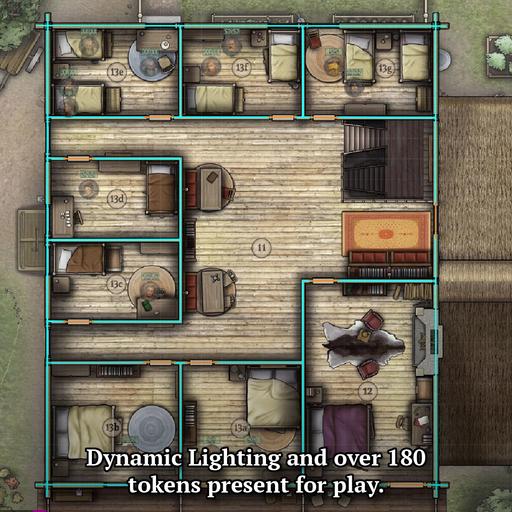 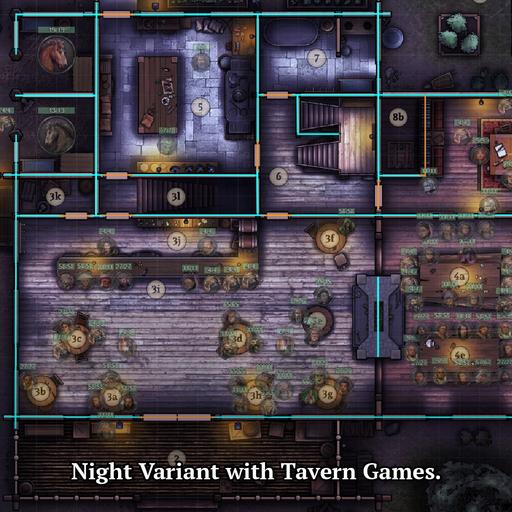 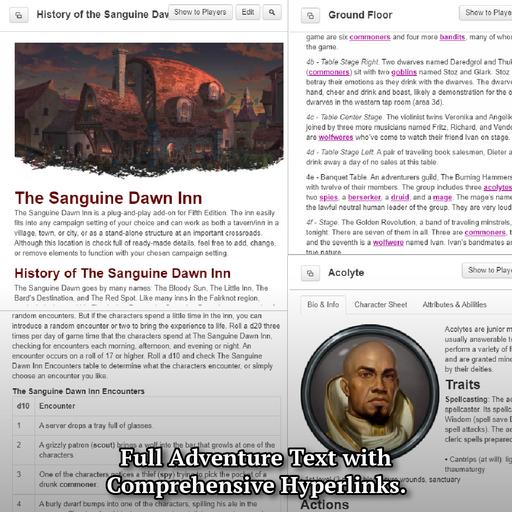 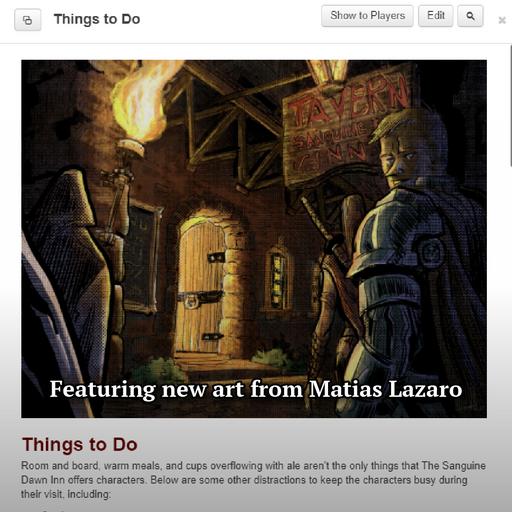 Install this add-on for a robust and dynamic inn and never prepare an inn again! This add-on includes:

Where to Add This Supplement

The Sanguine Dawn Inn is a plug-and-play add-on for Fifth Edition. The inn easily fits into any campaign setting of your choice and can work as both a tavern/inn in a village, town, or city, or as a stand-alone structure at an important crossroads. Although this location is chock full of ready-made details, feel free to add, change, or remove elements to function with your chosen campaign setting.

History of The Sanguine Dawn Inn

The Sanguine Dawn goes by many names: The Bloody Sun, The Little Inn, The Bard’s Destination, and The Red Spot. Like many inns in the Fairknot region, particularly those within The Amber Forest, the Sanguine Dawn has a reputation for being a comfortable place in the daytime, a rowdy spot in the late afternoon and early evening, and downright dangerous late at night.

Few remember a time before the inn existed. It predates many of the villages and hamlets in Fairknot and acted as an important crossroads stopover point for years before it was consumed by encroaching civilization. The inn’s founder, Lord Josua Dehnert, used gold saved from his time serving on Knotside’s militia to purchase the tavern.

Today, Dehnert’s ancestor Rainer owns The Sanguine Dawn and manages its day-to-day operations. A retired adventuring wizard, Rainer Dehnert keeps the wealth from his past pursuits as well as the earnings of the tavern locked away in the inn’s hidden vault. Having paid off its debts decades ago, the inn keeps low overhead. And since it’s full almost every night, it’s an enormously profitable venture.

So profitable, in fact, Denhert keeps the inn’s true earnings in an off-site vault, its location only known to Rainer. Although no one beyond Rainer Denhert has laid eyes upon Rainer’s vault, it’s rumored it holds almost as much wealth as a legendary dragon’s hoard.

The inn itself stands on a rock outcropping that overlooks The Amber Forest. Nearby, the Creek Carstens slides past the inn on its way to join the Fairknot River to the south. The creek’s cool rushing waters collide with the warm air creating a dense mist that clings to the forest at night and early hours in the morning. Frequent visitors to the inn whisper the mists hold gruesome dangers. The inn’s staff warns all who dare exit the inn at night that dangers await in the darkness.

Not that the nightly regulars are much better, mind you. While the inn boasts a wholesome collection of patrons in the morning and daytime, the night shift attracts all manner of dark and vile folks. The inn suffers this clientele as these persons of ill repute pay well for the inn’s discretion. Since the days of the first Dehnert, the inn has had one rule: “not here.” As in, “if you’re going to commit crimes, don’t do it here.” Those who violate these rules often find themselves at ends with the current Dehnert and those who uphold the inn’s tradition. Regardless, the inn is less inclined to side with the law. Unknown (although suspected) to most local law enforcement, the inn provides amenities useful to those who hope to lay low or escape the eyes of justice.

Install this Add-On via the dropdown menu in the Game Addons section of the Game Details Page. Select The Sanguine Dawn Inn below and click on the blue Add to Game button beside the drop-down menu.