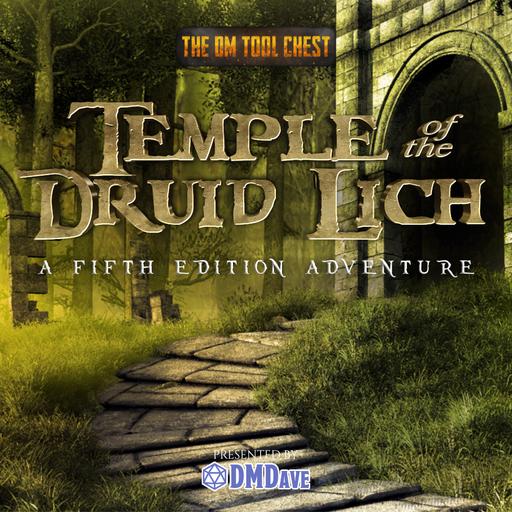 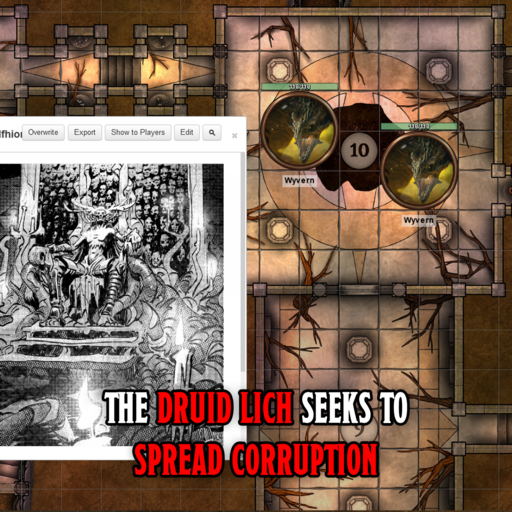 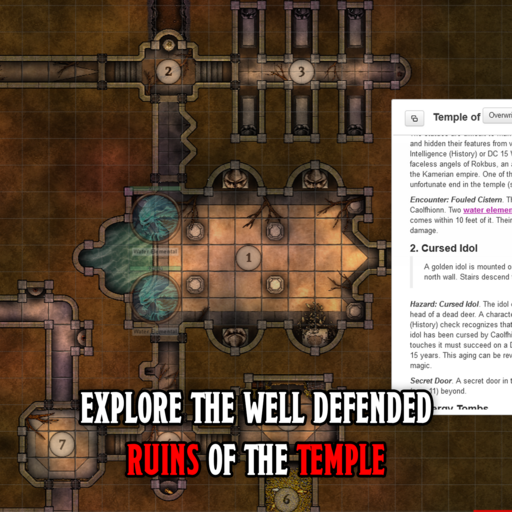 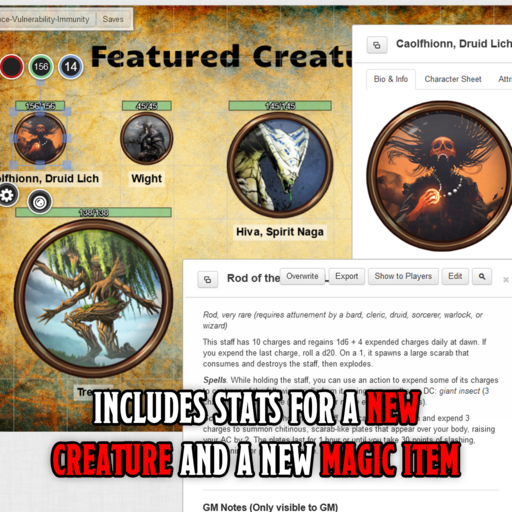 Temple of the Druid Lich

Temple of the Druid Lich

An ancient druid lich has seized the temple of her old nemesis and is plotting her revenge!

Temple of the Druid Lich is a Fifth Edition adventure for a group of three to six characters of 8th to 10th level, optimized for a party of four 9th-level characters. After millennia of abandonment, the ancient temple of a legendary necromancer has been reclaimed by a terrifying force and old enemy that is quickly expanding her territory: Caolfhionn, the Druid Lich. Gnarled, poisonous thorns have begun to spread from the temple, and shambling undead plant creatures roam the nearby sands in increasing numbers. If adventurers do not intervene, Caolfhionn the Druid Lich will soon make the desert her own. This adventure takes place near the city of Duwara in the Muhar Desert of the Freelands campaign setting, but can easily be placed into another campaign that features deserts and tombs..

Temple of the Druid Lich is also featured in the campaign The Burning Borderlands: Riddle of the Silver Pyramid, a thrilling, high-paced treasure hunt in forbidding desert sands!

Long ago, the necromantic sorcerer Gahiji the Wicked sought to bring the Kamerian empire and its lands within the Muhar desert to heel. He had dominated its people and erected sparkling temples in his own honor to declare himself the God King, conquering his new subjects under his iron fist and bringing about a new dark age to the Muhar. Gahiji came very close to total control—the only one left to oppose him was the powerful arch-druid Caolfhionn, who had watched over the desert for centuries. Caolfhionn, manifesting the wild powers of the land itself, led an uprising against Gahiji and was joined by a small army of insurgents brave enough to oppose the powerful sorcerer. It was an epic clash, and Caolfhionn and her forces came very close to victory—but ultimately were felled by Gahiji and his minions. Gahiji, enraged at his near-defeat, unleashed the full force of his fury on Caolfhionn, raising her from the dead as a lich and then imprisoning her deep beneath the sands in a magical tomb so that she would suffer an eternity of immortality. Gahiji had won and would rule over the Muhar desert and the Kamerian empire for decades to come.

After many millennia, Caolfhionn's tomb has been unsealed, and the Druid Lich is angry and yearning to take back control of the lands she lost so long ago. Immediately after being freed, Caolfhionn traveled to the Vrunhaja, one of Gahiji's most opulent temples that had been buried under the sands since the fall of Gahiji. The druid raised the temple from the sand and claimed it as her new lair in an act of symbolic defiance against her old enemy. Now, driven to near-lunacy by her imprisonment and clouded by anger, Caolfhionn has begun to expand her influence beyond the Vrunhaja, threatening to consume the Muhar desert with her growths as she reclaims the lands that were taken from her by Gahiji.

Install this Add-On via the dropdown menu in the Game Addons section of the Game Details Page. Select Temple of the Druid Lich and click on the blue Add to Game button beside the drop-down menu.