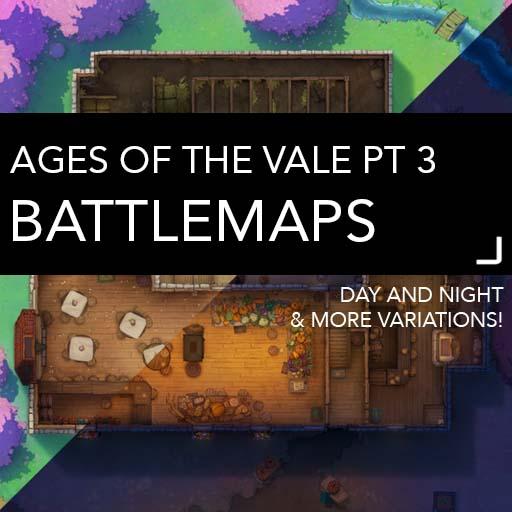 Ages of the Vale Part 3!

This is the final part of our Ages of the Vale series. (Part 1 - https://marketplace.roll20.net/browse/set/12132/ages-of-the-vale-part-1, Part 2 - https://marketplace.roll20.net/browse/set/12254/ages-of-the-vale-part-2) Again, thanks so much to everyone who told us they were enjoying this series and those that had already swapped out their taverns and home bases for these, which is always amazing to hear!

For this final release we see the building reach its final stage: The Coach House. Now with a cellar, an upper floor, a thatched roof, a kitchen, many stables, two bars, a covered well and a bunch of storage rooms.
And here's some of the side quests and encounter ideas we had for the variations (in order):
- The Fungi Dryad's tree has collapsed in a fierce storm and was cleared away by the inn owners. This has caused her to fly into a rage spawning fungi all over the area.
- To appease the Dryad the villagers have planted a new sapling for her but are finding it hard to convince her to attach to this new tree.
- The inn is hosting a wedding but on the eve of the ceremony both the bridge and groom has disappeared under mysterious circumstances.
- It's time for harvest and there's a competition for the biggest and best veggies and they need you to stand in as the judges. There's some delicious (and possibly magical) pumpkin soup on offer. Just make sure no one snuck in any mandrakes...
- The village is hosting a funeral and need some guards to protect the ceremony from the Sorrow Beasts that are drawn in by the negative energy.
- Weeks later a mysterious ethereal figure is seen walking the halls at night, disturbing guests and leaving sticky ectoplasm on the walls.
- Enraged by years of low pay and hard work the villagers have joined a workers revolt, they're amassing in the courtyard with pamphlets and pitchforks and have asked your party to join their cause.
- Prohibition is sweeping the countryside. The inn has had all its liquor poured away but some resourceful villagers are setting up a brewery and speakeasy in the cellar away from prying eyes. But someone needs to ward off the Prohibition Agents going around.
- A harsh and prolonged winter has snowed in the inn and its regulars, stranding them with dwindling food and ale, someone needs to brave the weather (and the prowling Yetis) and get help.
- Something primal has gone awry in the world, the river keeps bursting its banks and the rain isn't sinking into the soil, springs shooting up all over the village and the water keeps rising, soon a flood is forcing everyone to the hills and the rooftops and they need rescuing.
- The rain fell and fell and fell and never stopped, the village was submerged and then forgotten, the buildings rotted into husks but in the new underwater world of the village the fish moved in and along with them a terrifying Flood Hag who is rebuilding the inn into her lair.

34 Items Included in Ages of the Vale Part 3!