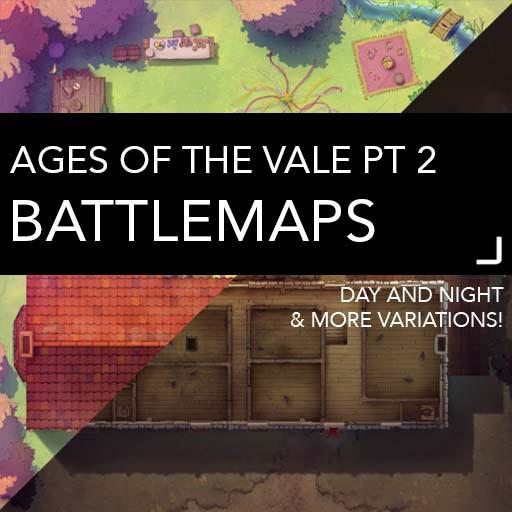 Ages of the Vale Part 2!

We're back for part 2 of our Ages of the Vale collection. Thanks so much to everyone who sent us kind comments and messages both here and on Discord about part 1! We're really glad you all liked this concept so much.

So if you haven't yet, please check out part 1 at the link below! That pack will get you up to speed with what this series is all about.
https://marketplace.roll20.net/browse/set/12132/ages-of-the-vale-part-1

Following on from the devastating dragon assault where part 1 finished, the resiliant villagers decided to turn their ramshackle tavern into a proper inn, adding a real interior and a 2nd storey to the building.

Further on in history they decide to expand again, this time excavating their cellar for storing casks of beer and ale.

Again, we've tried to create a ton of variations that can be used for a whole host of adventures, encounters and side-quests, such as:
A dragon festival has gripped the village and things are getting out of hand, one of the ale barrels has come alive and is tormenting the villagers,
A dryad comes takes possession of a tree next to the tavern but it's tree is later destroyed in a storm,
A wicked fog rolls over the Vale and mysterious footprints are discovered whenever it passes,
A demonic beast takes over the well and poisons the water supply,
The dead rise from their graves as skeletons and zombies,
Giant spiders come from the nearby woods and start webbing up the whole village,
Gallows are being setup for two criminals but the party aren't sure if they're guilty after all,
A rip in time separates the inside and the outside of the inn,
The mayflower festival has come and the party are asked to be the judges but the consequences aren't quite as they seem,
The local lord has hiked up taxes halting the expansion of the inn and the peasants are starting a revolt,
A blight has caused the local crops to wither and a famine grips the village,
A host of rats and the rat king have been unearthed from the cellar excavation causing an awful famine,
We hope these ideas and more become obvious when you see the details we've added to all of the maps and variations. And that you can surprise your players with them each time they return to town to rest up! :)

45 Items Included in Ages of the Vale Part 2!