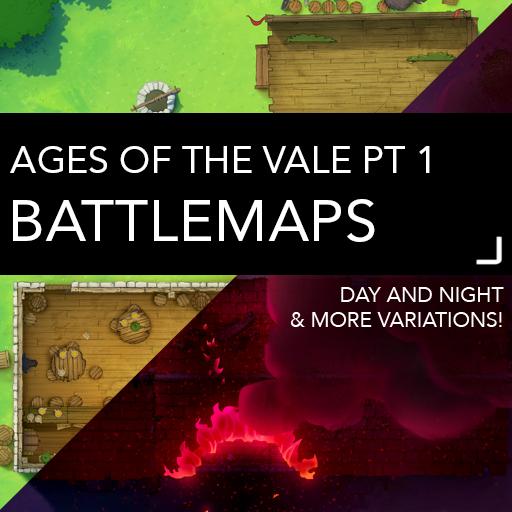 Ages of the Vale Part 1!

Oh, there you are!

Come quickly and gather round. Don’t mind your muddy boots. And you can leave that shield by the door. There’s still space at the bar, or come pull up a chair here with us.

There’s plenty of fuel for the fire, so relax and grab a pint.

Oh, so where are we? A simple tavern of course. The sort you might find anywhere along your journey, the sort with a roaring fire, loyal pups by the door and local bards caught mid-song without the right lyrics.

But there were already so many taverns out there and we wanted to make ours special.

So a better question than where we are, might be when we are.

A building doesn’t exist in a single point in time. They stretch through a community’s history. And more than any other building, a tavern ties all the locals together. A tavern tells the story of a community, its births and baptisms, its feuds and families, its weddings and wakes, it uprisings and undulations, winding through history.

A community without a tavern is like a bear without armour or a samurai without a sword. It was about time we had one around here.

So this isn’t just a tavern, but a story of a tavern, through all of its history. A story of its simple pastoral conception to its last customer and on into its ruin until it is claimed back by the earth, left to rest at last. A memento mori of sorts, a memory box of a village that we wanted to create for you.

And we hope that this can be a recurring locale in your campaigns, that changes and grows as your party grows. Perhaps the party can own it, become its stewards, fix it up, hire locals for your retinue.

We've purposefully designed this map so that it ties in thematically and stylistically with several of our other maps, notably Crossroads, Serene Lakeside, Impact Site, Baba Yaga's Domain, Medieval Monster Festival, Adventurer's Guildhall and Ogre Queen's Feast. Hopefully with these maps combined you can set up a hub area for your players with tons of variations for when they come and go from the dungeons to the village.

42 Items Included in Ages of the Vale Part 1!