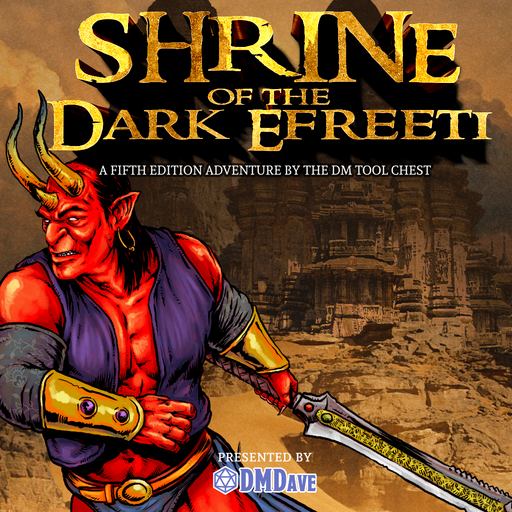 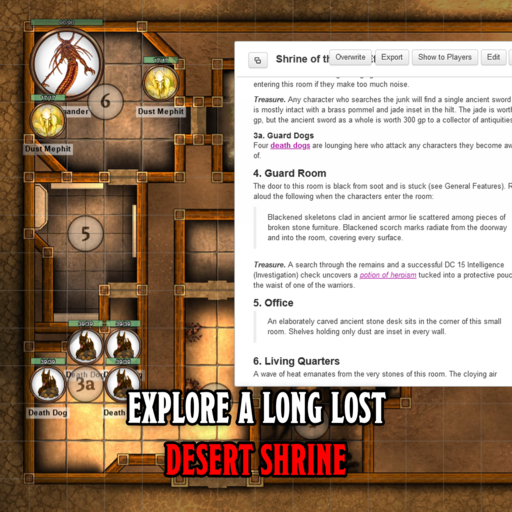 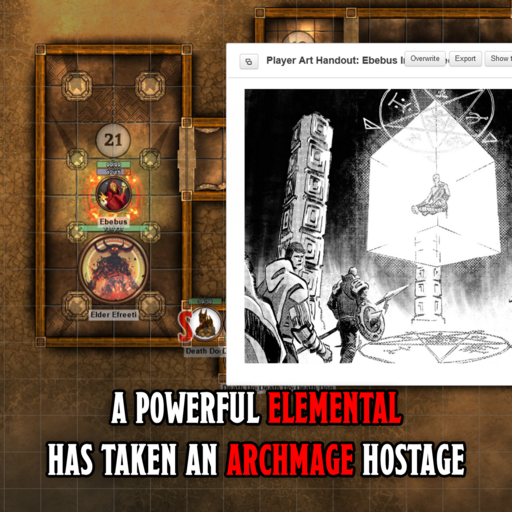 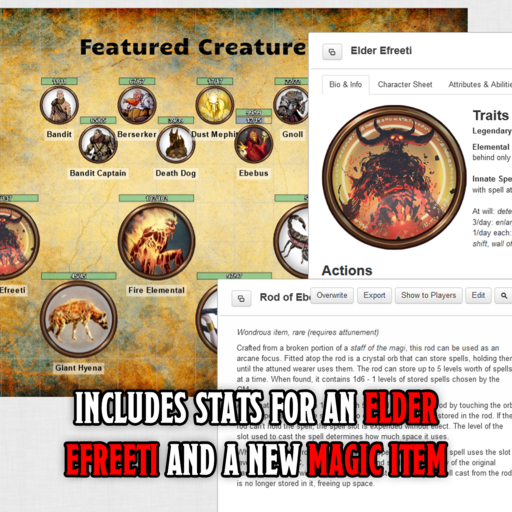 Shrine of the Dark Efreeti

Shrine of the Dark Efreeti

Shrine of the Dark Efreeti is a Fifth Edition adventure intended for three to five characters of 8th to 10th level and is optimized for four characters with an average party level (APL) of 9. Characters who complete this adventure should earn enough experience to reach one-quarter of the way to level 10. An ancient pyramid tied to the elemental plane of fire holds a powerful archmage prisoner. This adventure takes place in the Freelands campaign setting but fits into any existing campaign with a desert and ancient pyramids with only a few modifications.

Shrine of the Dark Efreeti is also featured in the campaign The Burning Borderlands: Riddle of the Silver Pyramid, a thrilling, high-paced treasure hunt in forbidding desert sands!

The archmage Ebebus was once the influential leader of a conclave of mages residing deep in the heart of the Muhar Desert. The Golden Sands Enclave’s wrath was feared throughout the land, and few dared to oppose them. They sought to extend their powers and challenge the gods themselves, with none to stand in their way. Ebebus and his conclave began to increase their power by connecting their pyramid fortress to the elemental plane of fire. Unfortunately for them, in their lust for power, they grew too hasty and arrogant. The gods became aware of the upstarts and decided to punish them for their folly.

Trasklyn and Ares, the gods of fire and war, took it upon themselves to make a lesson out of the enclave. The gods strode through the fortress in their avatar forms, slaying the enclave members one by one for their hubris. Eventually, they came upon Ebebus summoning creatures and power through the elemental rift he had created to challenge the two gods. Raising his magic rod in defiance, Ebebus unleashed the entirety of his powers against them—to no avail. Laughing at the archmage’s temerity, Trasklyn and Ares tore the rod from Ebebus’s hand. They imprisoned him in his fortress, ordering the elemental beings to be his jailors for eternity as punishment.

With the enclave destroyed, the fortress turned prison became a physical reminder to mortals to never again seek to challenge the gods. As the years passed, this lesson was forgotten as the story faded from memory and could only be found in the dusty pages of ancient history books. The Shrine of Ebebus still stands to this day deep in the desert, shunned by the locals for reasons they no longer remember but still fear. The rift to the plane of fire has been slowly heating up the region over the centuries, burning away the plant life and drying up the water sources.

Install this Add-On via the dropdown menu in the Game Addons section of the Game Details Page. Select Shrine of the Dark Efreeti and click on the blue Add to Game button beside the drop-down menu.