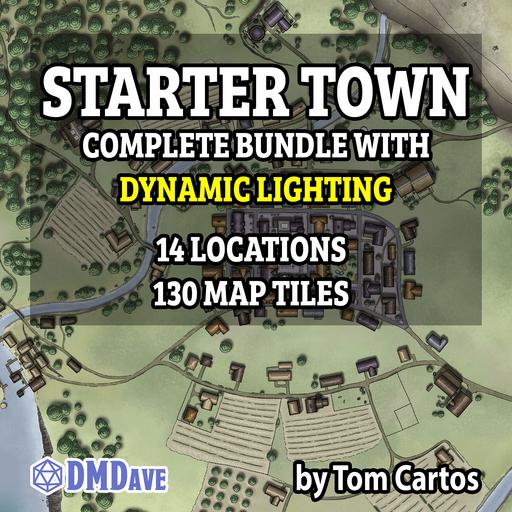 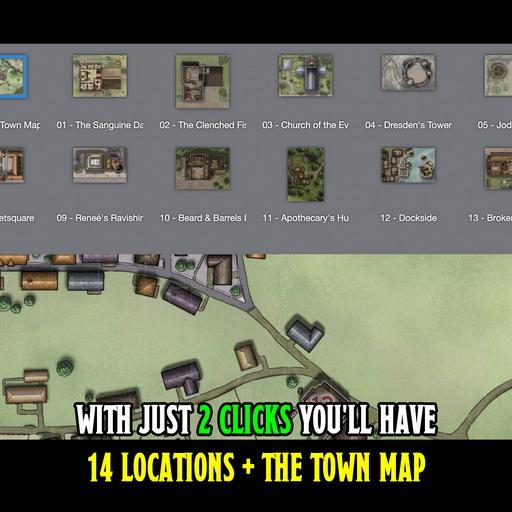 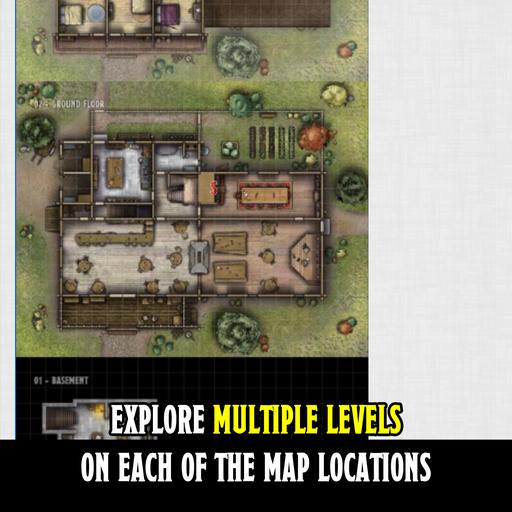 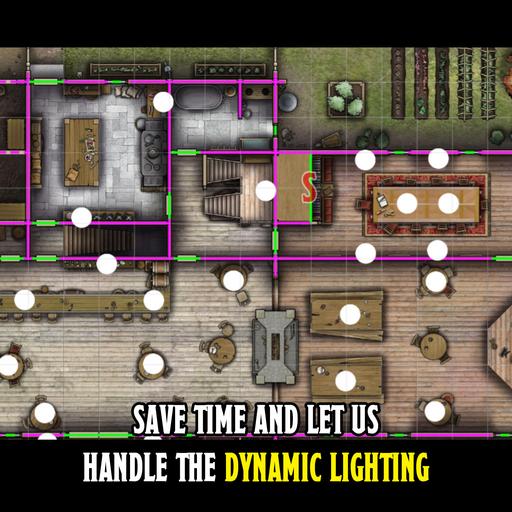 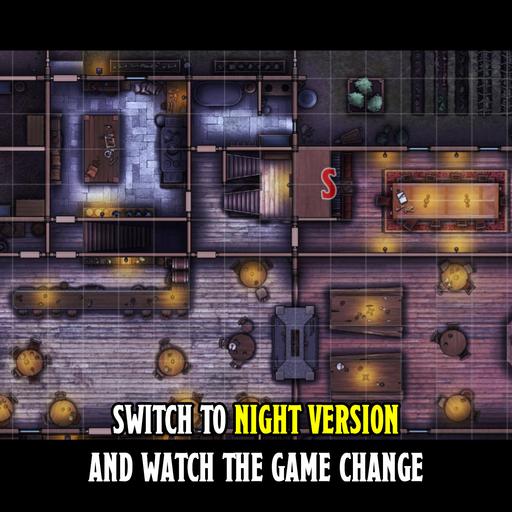 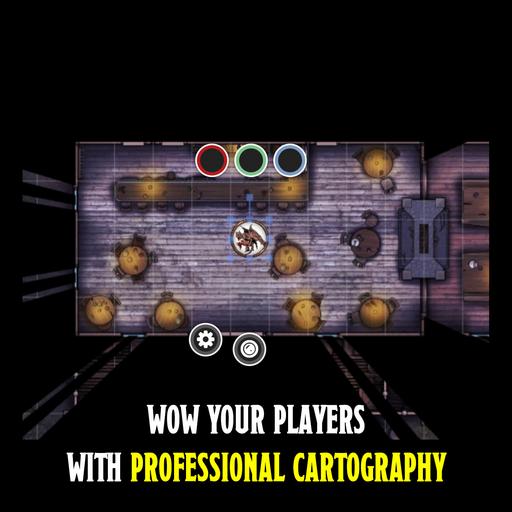 Install this pack for a fully-built town for your games!

Whether you need a home base for your fantasy characters or an urban sandbox for a series of adventures, this pack will have you prepared 14 unique locations.

It only takes two clicks to add this to your game. After you make the purchase, go to the game of your choice, select add-ons, then pick this set from the dropdown menu. And that's it! All of the sizing and dynamic lighting is already done for you.

This add-on contains 14 locations and one town map of Ostenwold:

The Sanguine Dawn - A 4 Level Inn and Tavern, including everything you need for a restful stay. A roaring fireplace, a warm bath, a stage for travelling bards, comfy bedrooms upstairs with a view, a fully stocked kitchen, a secret trapdoor behind a bookcase leading to a hidden underground chamber and the sewers beyond.... wait, what?

Reneés Ravishing Raiments - A 4 Level Tailors and Magic Item Shop. Renée, a glamorous, seemingly ageless half-elf, tailor-makes all of her pieces from the finest elven silks and fabrics. For those she deems worthy (or at least wealthy) she also runs a VIP store stocked with hand selected magic items, spell scrolls and enchantments for the discerning adventurer.

The Clenched Fist Blacksmith - A 4 Level Blacksmith and Armoury. Run by a giant of a human, Horst Blackfoot. Some say he has Goliath blood in him, but his thick black beard suggests otherwise. His wares are well renowned for their quality, but even so his home is luxuriously decorated for a humble blacksmith. Upon further investigation, or maybe just by asking nicely, the party might discover the underground bare knuckle fight club being run in his cellar.

The Broken Compass General Store - A 4 Level Traders Post and Stable. Whether you are passing through and need a place to restock and freshen up, or are planning on sticking around a while to look for work, The Broken Compass offers everything you need! Cheap dorms rooms or tent pitches for the weary, stables for the horses, a Cartwright to mend your busted wagon and all the general goods you need for an journey on the road. If you're looking for a little distraction, the gaming hall below is open to all, and VIP rooms are available for those who can prove their financial clout. Just remember, cheaters will be caught, and very few come back unchanged after a visit to 'The Chair'.

Dresden's Tower - A 10 Level Wizards Tower. Atop a mountain overlooking the nearby town sits the imposing tower of the Wizard Dresden. Although generally cold and unwelcoming, Dresden is well liked by the locals as he has been known to help them out on occasion when other avenues have failed. If the party really needs assistance, he may be open to hearing them out.

Eastwatch Garrison - A 4 Level Fort, Guard barracks, and Jailhouse. The half-elf Captain of the Guard and Justice Keeper, Regis Forlorne, is a by-the-books militant type who demands perfection from his recruits. Unbeknownst to them however, he leads a double life in the cells below the garrison. Some have remarked how prisoners occasionally disappear, their records seemingly expunged, and the moans heard in the night? Probably just the wind.

Altria's Apothecary Hut - A 2 Level Healers Cabin, Forest Path and Monster Lair. While searching for a potion store in town, the party hears about an apothecary who lives out in the woods. They are warned, however, that she doesn't take kindly to visitors, and they absolutely shouldn't travel there at night as there have been monster attacks in the forest recently. "What's that you say? You're not scared of monsters, well maybe you can take care of the problem for us, might be a reward in it"

Dockside - A 4 Level Fishing Village and Underwater Cave System. A short walk from town on the shores of the nearby lake is the area known as dockside. Home to humble fisher folk, it is rarely visited by adventurers, but if you need to get across the lake it would be quicker to take a boat across than to walk around. Unfortunately, it seems no one is offering passage at the moment. Alberun, the gnomish Dockmaster, explains that a series of odd thefts have happened lately, and in such a small community this has quickly lead to mistrust of strangers. There are few valuables in the hamlet worth stealing, instead the thief or thieves have been taking fishing supplies, and a few worthless, shiny objects have vanished as well. No one has any idea who the culprit is, or where the stolen goods are, but Hemun over at the Smokery swears he saw a creature emerge from the seas in the dead of night. “T’was a man, but not a man. It stood on legs and walked like us, but had fishy scales and the stench of the sea about it".

Jodak's Mill - A 4 Level Windmill, Millers Cottage & Smuggler's Hideout. The local mill has been run by the gregarious halfling Jodak and his family for as long as anyone can remember. However in recent times, he has become very insular, rarely leaving the mill and only coming out to talk business. His old friends are worried about him, and in particular the scar he seems to have gained across his right eye. If the party goes to investigate, will they uncover the hidden smuggler's den below the mill, and will they determine that Jodak and his family were held hostage by the smuggler's or that Jodak was in fact the mastermind all along?

Ungrimst Family Farmhouse and Townhouse - A 3 Level Farmhouse and 5 Level Townhouse. The longstanding feud between the Ungrimst brothers is well known by all in the town. Brandon, the elder, claims his younger brother abandoned the family farm when their parents died, instead seeking vain, shallow wealth in the richer parts of town. Gerome, the younger, claims he was kicked out of the family home by his older brother after their parents death, sent out penniless, but made his fortune on his wits. The resentment lies deeper still however. Both brothers claim the other has withheld certain artefacts, items from their parents adventuring days that were promised in the will. They will both try to persuade the party to 'liberate' these items and return them to their rightful owner.

The Church of the Everlight - A 4 Level Church, Graveyard and Crypt. A place or sanctity and tranquility, the Church of the Everlight is open to the devout of all faiths, as well as those who follow none. The abbess Temerion and her priestesses offer kind words, support and when the need arises, healing of both the spirit and the body. Unfortunately the peace and quiet has been broken of late, and the women have been unable to give their sermons or perform their healing magic, so disturbed are they. A few days ago, grave robbers broke into the crypts below the church, desecrating one of the tombs. Ever since, low groaning and an incessant 'thump.....thump.....thump' has been heard in the graveyard.

Beard & Barrels Brewhouse - A 4 Level Brewery and Tavern. The Beard & Barrels Brewhouse is run by four Dwarf sisters, Helga, Bolga, Frieda and Carmine. The quality of their ale is matched only by the luxuriousness of their beards (the secret is washing them with beer!) Whether your poison of choice is Ale, Mead or hard liquor, all are welcome to stop by for a pint. Just don't try to keep up with the proprietors, they have been known to drink Giants under the table, especially Carmine, the petite (for a dwarf) youngest sister.

Market Square & Mayor's House - A 4 Level Town Square, Marketplace, and Town Hall. Every town has a nucleus, a center point around which the settlement grows. The Market Square is a place where the community gathers once a month to trade goods, gossip and learn of news from the outside world. Fisher-folk from Dockside, Horst the local smith, the Beard and Barrel dwarf sisters, even Renée and her Ravishing Raiments. All the townsfolk come together on the day of the full moon to celebrate their shared home. Somehow none of them saw the murder until it was too late. The body of the mayor’s aide, a young half-elf woman named Brynne, lying in a pool of her own blood under the fountain. Killed in broad daylight with the entire populace nearby, and not a single witness. The killer must have been a professional, and a ballsy one at that, with the nearby guard station fully manned for Market Day.

Ostenwold Town Map - A Town Map marking the location of all of the maps described above, as well as the rest of the town. Scaled at 1 Grid = 30 ft for real-time travel around town.

Install this Add-On via the dropdown menu in the Game Addons section of the Game Details Page. Select Ostenwold Starter Town with Dynamic Lighting and click on the blue Add to Game button beside the drop-down menu.