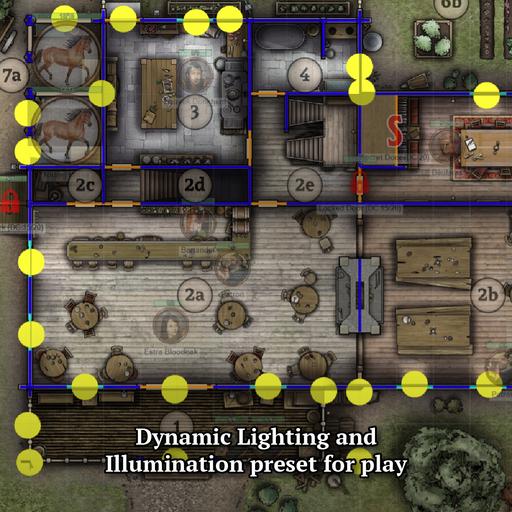 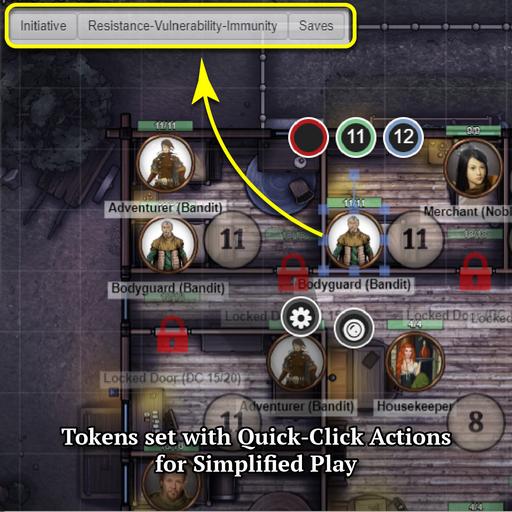 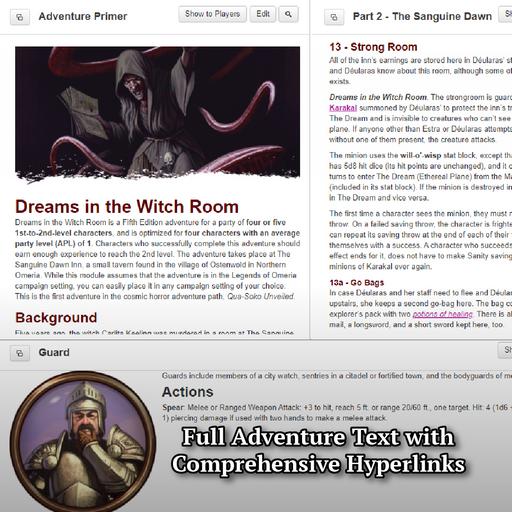 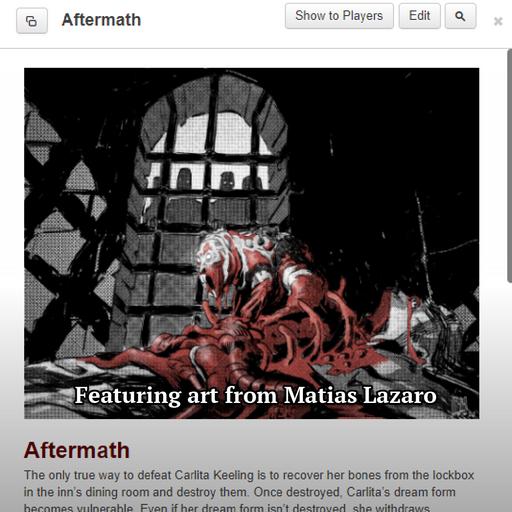 Dreams in the Witch Room

Dreams in the Witch Room

Dreams in the Witch Room is a Fifth Edition adventure for a party of four or five 1st-to-2nd-level characters, and is optimized for four characters with an average party level (APL) of 1. Characters who successfully complete this adventure should earn enough experience to reach the 2nd level. The adventure takes place at The Sanguine Dawn Inn, a small tavern found in the village of Ostenwold in Northern Omeria. While this module assumes that the adventure is in the Legends of Omeria campaign setting, you can easily place it in any campaign setting of your choice. This is the first adventure in the cosmic horror adventure path, Qua-Soko Unveiled.

Five years ago, the witch Carlita Keeling was murdered in a room at The Sanguine Dawn Inn by a party of Aspaethan Witchhunters. Not only did Keeling practice the banned magic schools of conjuration, enchantment, and transmutation, but she was also a serial kidnapper and murderer. After she died on Aspaethan spears, Keeling’s body was burned on a pyre a few hundred feet from the inn. Curiously, Keeling’s bones disappeared from the pyre’s ashes. The witchhunters vigorously searched Ostenwold for the dead witch’s bones, but never recovered them.

Recently, a Pexian scholar with interests in aberrant-geometry named Walabras stayed at The Sanguine Dawn Inn. Having read about the witch, Walabras hoped to study the witch’s old room. To his surprise, Walabras immediately noticed something unusual in the dead witch’s room: its angles and dimensions defied physics. And at night, as he slept, Walabras dreamt of strange cyclopean cities filled with bizarre, elder things. These winged, barrel-shaped creatures worshipped colossal, great old ones whose shapeless forms boiled into iridescent, prolately spheroidal bubbles. Walabras woke each morning in a cold sweat. The inn’s purveyors took notice of Walabras’ growing anxiety.

Walabras’ dreams escalated. In one horrific dream, a formless man composed of dark shadow forced Walabras to add his name to an ancient tome made of writhing worms. After signing, Walabras’ dream form traveled to the throne of a great, chaotic mass whose name Walabras immediately recognized: Black Tezcatlipoca, the Night Wind. There, Carlita Keeling’s ghost, her rat-thing familiar Drace Lobo, and The Shadow Man joined Walabras. Under Keeling’s command, Walabras was forced to be an accomplice in the kidnapping of an infant. Waking from the nightmare, Walabras discovered his boots covered in mud. Shortly afterward, the Ostenwold town guard confronted Walabras at the inn and arrested him on suspicion of kidnapping the infant Bela Ungrist.

Immediately, the Ostenwolders demanded justice for the missing Ungrist child. Recognizing the unrest Walabras’ presence caused the Ostenwolders, Regis Forlorne, the village’s Captain of the Guard, tried and found Walabras guilty of kidnapping and murder. In three days time, Walabras will be hung by the neck until he is dead at the center of the Ostenwold market square.

Install this Add-On via the dropdown menu in the Game Addons section of the Game Details Page. Select Dreams in the Witch Room and click on the blue Add to Game button beside the drop-down menu.