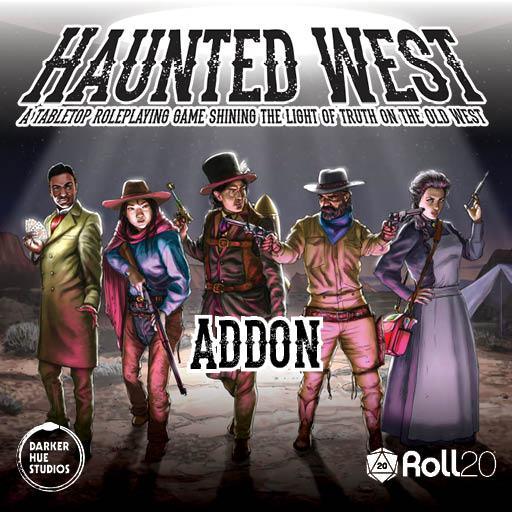 Sign In
This Game Addon is available in the following bundles

...is one of the world’s most familiar modern myths. The time was draped in ruggedness; there was an idealized dream of freedom, and a notion that just one person could shape the world. That myth belongs to all of us. Yet so many stories of truth, justice, and the American Way have been stolen, erased, and never recorded. Haunted West is a game about hope through struggle. It is a game that pieces together the stories of the largely forgotten people of the Old West, the people who have been whitewashed by history. Discover the American experience in the Weird West.

Grab your rifle, jet pack, and spurs to battle traitorous rebels in the defense of freedom, join the fight against temporally displaced dinosaurs, rustle cattle to make ends meet, and hijack a train full of illicit Confederate gold!

A game about the missing stories of the Wild West and moving forward in a respectful way… while also incorporating Weird West and fantasy. “The West and its mythology are drenched in prejudice regarding race, sexuality, gender, religion, ethnicity, and anything under the sun that makes humans different from one another. Throughout the book, we’ve shined a light on that bias and oppression and also on those who struggled against it. This is a story of the land we live on. It’s not just a tale about people who were Black, Chinese, Indigenous, Jewish, white, Mexican, and others; it’s a story about all of us, together. Everyone and no one can take center stage. It’s a story of community, or at the heart of it, striving to become one.”

“I didn’t expect an independent company to produce an eight-hundred-page masterpiece of history, setting and game mechanics that marshal so many people’s talents.” - Game Industry News

Haunted West blends Western stories with the supernatural, the otherworldly, and extraterrestrial; in other words, the Weird. Weird West stories often evoke wonder or horror. They can be cinematic and epic, or gritty and almost real. The stakes can be personal or global, with Paragons (our protagonists) racing toward the end of their quest, the end of the world, or both.

All book assets and information are fully integrated for the VTT, including all 69 statblocks, all 5 maps with GM layer information, rollable tokens, rollable tables, and macros.

Make your Paragons with a host of character options:
* 12 Paragons like the Academic, The Drover, and The Hunter
* 64 Peculiarities like Keen Senses, Silver Tongue, or Allergic
* 217 Propensities like Before Dawn, I Have a Knack for That, and Bounded By My Power

In Haunted West you'll get all book assets and information fully integrated for the VTT!

Three scenarios are included in an addon; The Hidden Science is a metaplot that works alongside your home game set in Haunted West: Reconstruction. The Haunted Gun is the skeleton of a ballad that can be implemented as a series of side events in your game. Night of the Aerostat is a full, short-length introductory Bag of Nails with everything you need to run.

Addon: This adventure includes an addon. To add to a new or existing game, add via the Game Details Page. On the Game Details page, scroll down to the Game Addons section. Select the desired addon from the dropdown menu and then click add to game. Everything from the addon will be available next time you enter the game.

Compendium: You can access all of the rules, items, and creatures from this product in the in-app compendium, as well as on the Roll20 Web Compendium.

Art Pack: You can access the Art Pack under the Premium Assets section of the Art Library in-app. These assets are only available for in-app use.