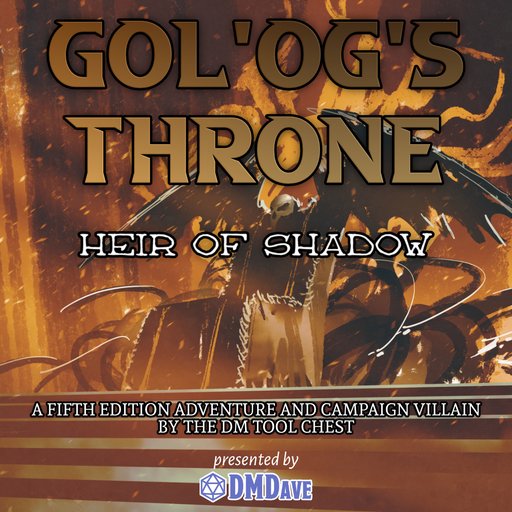 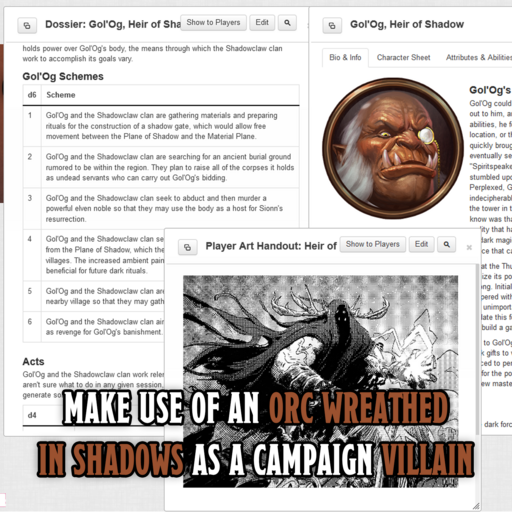 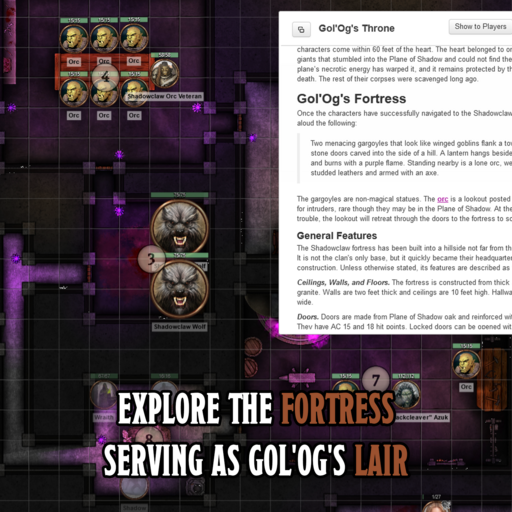 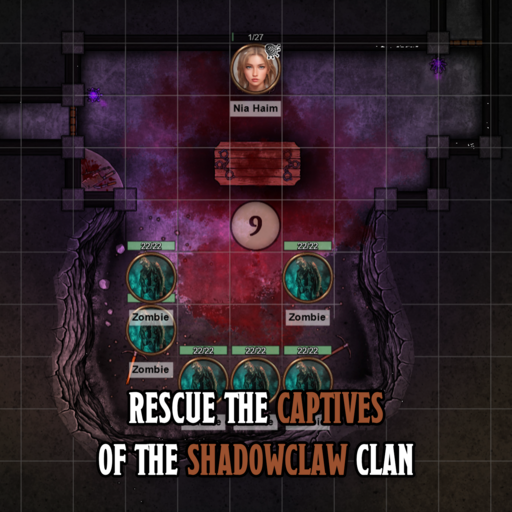 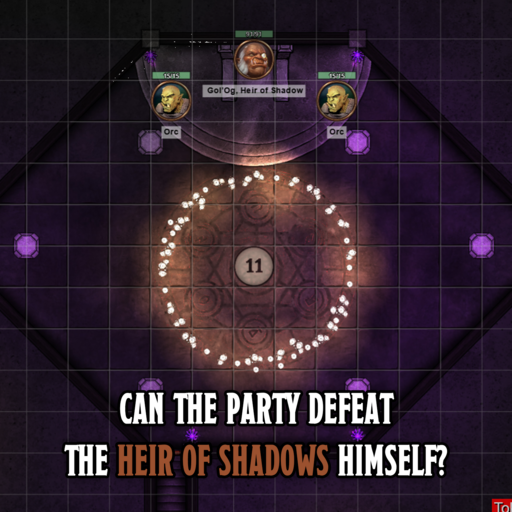 Introducing Gol'Og, Heir of Shadows, a new villain for your campaign!

Gol'Og's Throne is a Fifth Edition adventure designed for three to six characters of 5th to 6th level, and is optimized for a party of four 5th-level characters. The orc warlock Gol'Og and his Shadowclaw clan followers threaten to overlap the Plane of Shadow with the Material Plane. It will be up to a brave group of adventurers to travel through the shadow gate and defeat Gol'Og and his forces within his Plane of Shadow fortress. Should the adventurers fail, Gol'Og threatens to bring death and darkness through the shadow gate and into the Material Plane. This adventure can be placed into any campaign that includes multiple planes or dimensions, preferably including a plane of shadow, death, darkness, or similar.

Gol'Og and his Shadowclaw forces have succeeded in constructing a shadow gate, which allows free movement between the Plane of Shadow and the Material Plane. Previously, the Shadowclaw could only move between realms by finding intermittent portals that appeared during the full moon—but now, with the gate finished construction, the clan can begin to bring the full scope of their plans to bear. Slowly, shadow essence will leak from the gate and begin to consume the region, setting the stage for the resurrection of Sionn, Prince of Oblivion.

In the meantime, Gol'Og and his forces travelled into the Plane of Shadow to establish their fortress, where it could be much more easily defended from potential threats on the Material Plane. Gol'Og has built a throne for himself inside his new fortress, where he communes with Sionn endlessly, fighting to keep control of his own personality. Sionn has promised Gol'Og planar royalty and immortality in return for his service, but Gol'Og can only realize these benefits if his mind has not been entirely overtaken by the Prince of Oblivion. Gol'Og lurks inside his new fortress, praying, meditating, and conducting rituals to build his strength and harness his latent power. If the adventurers cannot destroy Gol'Og for good, the Shadowclaw clan threatens to wreak a dark havoc on the Material Plane.

Install this Add-On via the dropdown menu in the Game Addons section of the Game Details Page. Select Gol'Og's Throne: Heir of Shadows and click on the blue Add to Game button beside the drop-down menu.